​The recent debate on the use of black face paint in morris has been at times lively and at others acrimonious, as is often the case in debates that largely come down to subjective value judgements. However, there is a place for objective fact and information to the extent that it can illuminate debate and support judgements, even though it cannot resolve such a debate in a meaningful way. One of my main motivations for running a second Morris Census in 2017 was to gather more detailed information on what face paint and/or disguise morris sides use, what changes they have made recently and what has motivated them to make those changes. ​I have not presented the arguments on either side of the debate as they are available elsewhere, but I present the data from the most recent survey to provide a description of how sides' use of face paint and disguise is changing.

Sides' use of face paint and disguise​

​What changes have sides made?

The debate about sides using full black face paint has prompted many sides to discuss and re-examine their use of face paint and disguise, and many sides have decided to change what they use regularly as a result of those discussions. The Morris Census survey aimed to capture what changes sides had made to the type of face paint/ disguise they use (if any). Given that most public debate on the issue has been in the past couple of years, asking what changes sides had made over the last five years seemed the most appropriate timescale.

The results of that analysis are presented below in the form of a Sankey diagram. Sankey diagrams are flow diagrams, which present changes over time ('before' on the left, and 'after' on the right), where the width of the flows represents the number of sides making a particular change. The data shows that the biggest change has been the proportion of sides who use full black face paint (as a proportion of those who use any form of face paint or disguise) falling from 37 per cent five years ago to 22 per cent now. Sides that formerly used full black face paint have typically changed to either partial black face paint/ 'smudges' or coloured/ patterned face paint. A small number have changed to not using any face paint or disguise. While several sides have made other changes, the overall proportions of sides using partial black, coloured face paint and masks are largely unchanged. 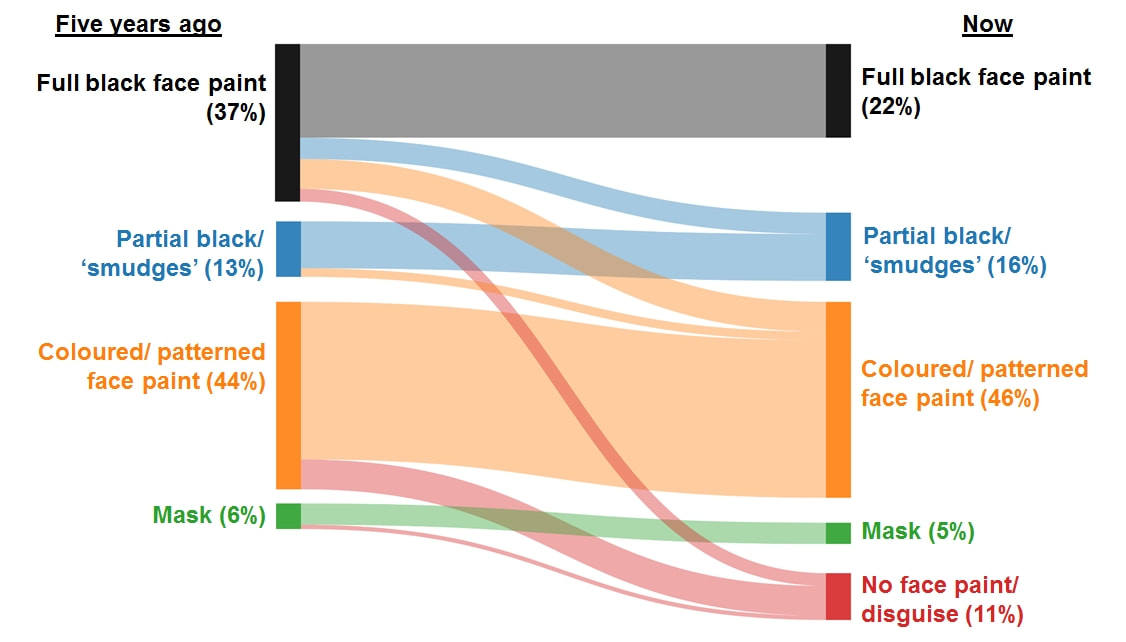 Why have sides made these changes?